My retreat lama, Karma Sherab, was something of a scholar in his younger years. At one point after he had served his root lama, Lama Tsepal, and had received mind instructions, Lama Tsepal said the only text he should read from then on is the Words of My Perfect Teacher.

From that time onwards, for the rest of his life, he stayed in retreat with the Words of My Perfect Teacher on the table in front of him. He would read a little and then contemplate it. When he reached the end of the text, he would go back to the beginning. For pretty much the last two years of his life, I stayed in the same room as him, so I witnessed this first hand. By that time he had spent decades in retreat.

The sides of the pages of his text were blackened and worn away with use. Often he would be brought to tears by what he read and what it invoked in him. He’d lose hours at a time in a state of either faith or deep compassion. When he’d come to, the front of his robes would be sodden with the tears he had wept.

When I noticed that he was particularly moved like this, I would sometimes take a peak at which part of the text he was reading. The points that always seem to move him the most were the suffering of cyclic existence and guru yoga. 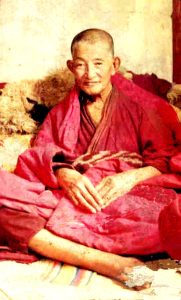 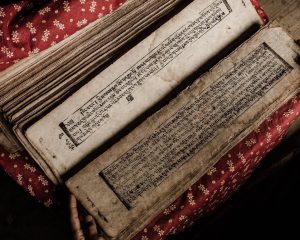 Tibetan Pecha of The Words of My Perfect Teacher 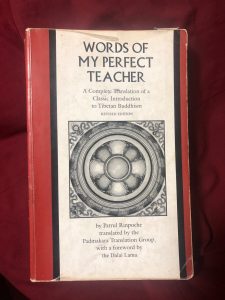